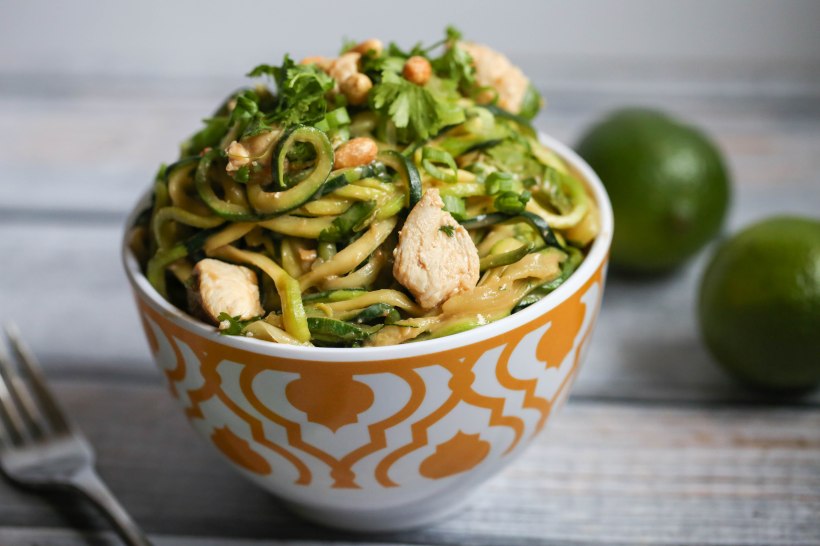 A couple of months ago some of the ladies from my gym got together for a potluck.  One of my friends brought shrimp and pork spring rolls with a peanut dipping sauce.  I’d never tasted peanut sauce before, and was pleasantly surprised by both the taste and texture of the sauce.  The dipping sauce gave me the inspiration for this dish, a creamy peanut sauce that’s both sweet and savory, tossed with steamed zucchini noodles and diced chicken sauteed in sesame oil.

You’ll need to plan ahead when making this recipe.  The zucchini will need to be sliced into noodles.  I have one of the more popular vegetable slicers, the Paderno Spiral Vegetable Slicer.  I used the blade of  the Paderno Vegetable Slicer with with 1/4-inch spacing to create the zucchini noodles for this recipe.  If you don’t have access to a vegetable spiralizer, you can use a julienne peeler to cut the noodles into strips, or try substituting the zucchini noodles with spaghetti squash, chopped cabbage (I know cabbage sounds weird, but it’s actually pretty tasty with this dish) or your other favorite noodle substitute.

If you’ve ever cooked zucchini noodles and then added them to a dish, you’ve more than likely discovered that zucchini releases a lot of water when cooked, and the water causes any sauces that are a part of the dish to become watery.  One trick I’ve learned to reduce the amount of moisture involves tossing the (raw) zucchini noodles in salt, and then letting the excess moisture drain from the noodles for 35-45 minutes before cooking the noodles.  This initial step will allow you to experience the thick and creamy peanut sauce, as opposed to the peanut soup I ended up with several times while developing this recipe. 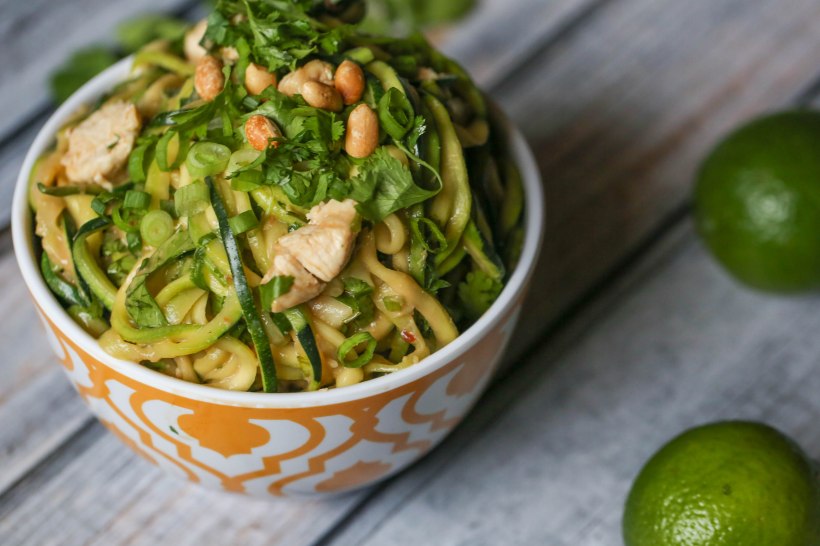 For the Peanut Sauce: